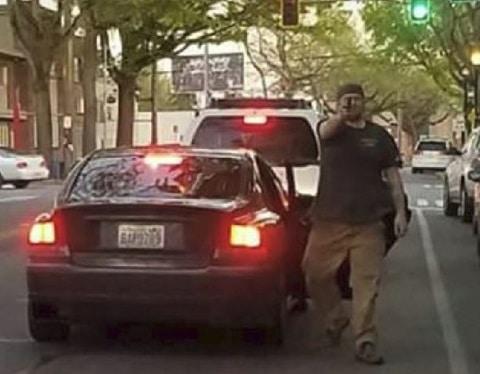 Police in Seattle are searching for a man who followed a 23-year-old and 30-year-old in his car while yelling homophobic slurs at them.

A photo posted on Facebook and since shared hundreds of times shows the suspect pulling a gun on the men.

In a statement, a Seattle police spokesperson said:

“[The two people] were crossing Rainier Avenue South and South Genesee Street when they passed in front of a black 2004 Volvo, which was stopped at the intersection. The traffic light changed as the victims walked across the street and the driver of the Volvo–described as a tall white male with reddish hair–began shouting comments about the victims’ weight and sexual orientation.”

According to Seattle.gov, the man left for a short time but when he returned he started to trail his victims. At this point, a passenger in the care threw a bottle which hit the 23-year-old on the arm.

The victims attempted to take a photo of the car. However, a man described as being in his late 20s with a heavy build stepped out of the vehicle into the street, pointing a gun at them.