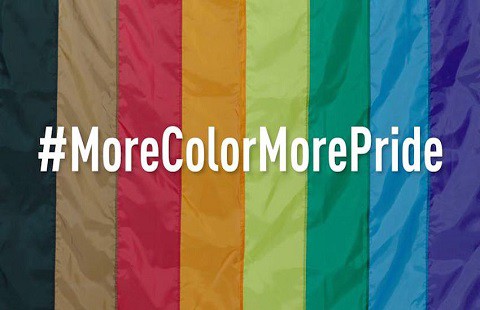 The city of Philadelphia has unveiled a new Pride flag that aims to be more reflective of the LGBT community’s racial diversity.

The new flag expands on creator Gilbert Baker’s original design by including black and brown stripes.

Amber Hikes, Philadelphia’s director of LGBT Affairs, said the new flag “instills so much pride in me as a queer black woman.”

“When I see the flag,” she added, “I see myself. The new design is a symbolic representation of Philadelphia’s commitment to centering the experiences, contributions, activism and dedication of black and brown members of our community. To me, this flag says: ‘We see you. We honor you. We celebrate you. You’re not just a part of us. You are us.’”

According to PGN, Hikes added:

“I feel that when we celebrate Pride Month and the LGBT community at large, we focus heavily on the same voices, identities and experiences. This year, I want to celebrate people who are too often left out of our narratives. I’m really excited to use this event to highlight people of transgender and gender-nonconforming experience [and] highlight youth and people of color for their contributions to the LGBTQ-liberation movement….

“This is not going to just be in Philadelphia. This is going to take the nation by storm. I believe that very deeply. This is an opportunity for the community to come together and celebrate not just Pride but also the community members whose voices and experiences that so often get overlooked. To me, this is a chance to stop saying ‘We’re inclusive’ and to actually begin showing it. More importantly, this flag is a step toward healing for our community and this genuine unity that so many of us are saying we want.”

More than 200 people were in attendance last Thursday to celebrate the unveiling and raising of the flag at the north apron of City Hall.

Flag designer Tierney and the Office of LGBT Affairs have developed a website where people can download the flag for free.

Watch a CBS report below.