Alt-right blog Gateway Pundit is to appeal to Paul Ryan a decision denying it a congressional press pass.

Although founder Jim Hoft (above left) has said Gateway Pundit aims to “speak the truth” and “expose the wickedness of the left,” is is known for spreading fake news stories and falsehoods.

A congressional press pass gives the holder access to areas of the Capitol sealed off from the public, including the press galleries and the Speaker’s Lobby. It is seen as a precursor for permanent press passes around Washington including to the White House and the Supreme Court.

On Tuesday, the Senate Periodical Press Executive Committee upheld its previous denial. A letter to Gateway Pundit noted that the blog does not meet the requirements for press credentials because it does not regularly publish a substantial volume of original material. The committee’s letter also pointed to the fact that Hoft identifies himself as an activist when no credentialed outlet is allowed to “engage, directly or indirectly, in any lobbying or other activity intended to influence any matter before Congress.”

However, according to Politico, Gateway Pundit’s attorney Charles Glasser plans to appeal the rejection to Ryan, whose office, along with the Senate Rules Committee, has ultimate “direction and control” of press credentials.

“As a First Amendment advocate, I am still very troubled by the admittedly ‘subjective’ decision of who is a mere aggregator and who is doing a summary or reaction story.

“That is a very dangerous road to go down, and any journalist ought to be concerned about any quasi-government body making decisions on what is and isn’t valid journalism. People can cast Gateway Pundit as ‘right-wing conspiracy nuts’ but that misses the larger and more important point. Today it’s Gateway Pundit, tomorrow it’s Huffington Post, or Bloomberg First Word.”

Leo Shane, chairman of the committee and Capitol Hill bureau chief for the Military Times, said that at no time in recent history have the speaker or the Senate Rules Committee overruled the committee of correspondents. Shane does not expect this position to change.

In an open letter to the committee, Hoft wrote:

“This afternoon we found out the committee upheld their initial decision to reject our access to the Senate press gallery. The committee did not inform us of today’s decision. Rather they leaked this to a liberal media outlet. We still have not heard from the committee directly. This is irresponsible and unethical. We will certainly bring this up in our next hearing. 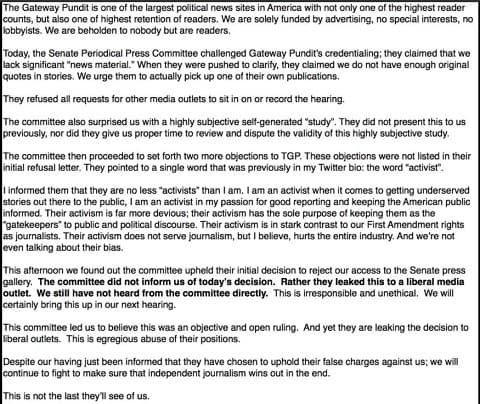 The committee has invited Gateway Pundit to resubmit an application and said the rejection “should not be seen as a permanent bar on the organization” provided Hoft publishes more original content and addresses concerns regarding activism and lobbying.