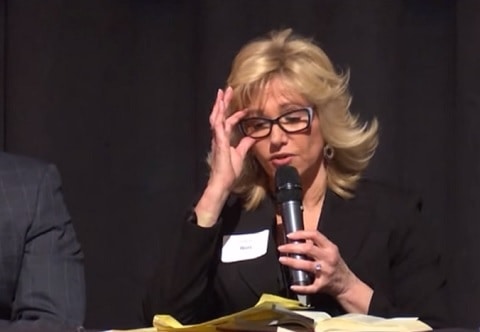 The American Family Association’s Sandy Rios has taken a swing at pro-LGBT religious folk because gay men are losing the opportunity to leave behind their “sordid” lifestyles.

Rios, who has called the murder of Matthew Shepard a “complete fraud,” explained that the true nature of gay relationships is “cleaned-up” by positive representations of LGBT couples on “HGTV, as though they’re a married couple, the same as a heterosexual couple, and that is just not true.”

Rios, who in 2015 suggested that a gay Amtrak engineer’s sexuality was “a factor” in a fatal crash, helpfully added that “sex between two men is not the same as sex between a man and a woman.”

RELATED: Rios Radio Show: Teaching Kids About Equality Just Like Teaching Them To Use Crack

“You know, the process that God has created is a physical thing that physically completes one person with another,” she said, “it is the way we are constructed, and anything other than that does not do that.”

In a wildly meandering piece, Rios voiced concern that kids are exposed to nasty gay stuff “as soon as they step foot into a public school” before segueing to a bizarre story about a formerly pro-LGBT woman who changed her evil ways after seeing “the physical abuse of gay men to each other, in ways I can’t even describe, the sickening things that they did to one another.”

She eventually got to the point, stating that her cold, dead heart goes out to “men and women who are caught in the throes of [homosexuality], who are really losing their opportunity to shake loose of it.”

“Some church leaders,” she croaked, “have really gone weak in the knees on this, and shame on them because people are dying because we will not speak the truth.”

Listen to Rios’s verbal diarrhea below via Right Wing Watch.