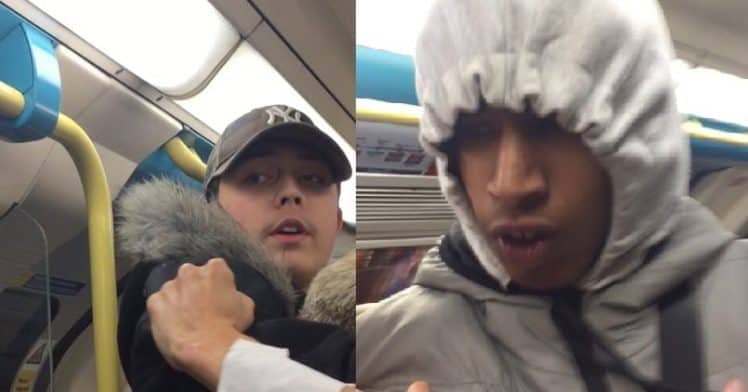 Authorities are hunting two men who attacked a 19-year-old on the London Tube in late October.

The two men strangled the teen, threatened to stab him, and demanded his phone before forcing him to apologize for being gay.

The police released photos taken of the men during the attack in hopes that they can be arrested.

They ordered him to apologise for being gay, which he did because he was unable to breathe.

After they eventually let go, they handed his phone back to him but a fight broke out with the victim’s friends and the offenders. One of them, a 25-year-old woman, was punched and pushed to the ground, sustaining bruising. The victims left the train at North Greenwich after one of them took a picture of the two offenders.

The British Transport Police released a statement: “Officers would like to speak to the people shown in the images as they may have information which could help the investigation. If you recognise them, please call BTP on 0800 40 50 40 or text 61016, quoting reference number 273 of 1/12. Hate crime will not be tolerated by British Transport Police. We believe that everyone has the right to travel safety. We won’t tolerate behaviour where someone is targeted because they are perceived to be different, or made to feel uncomfortable on their journey.”