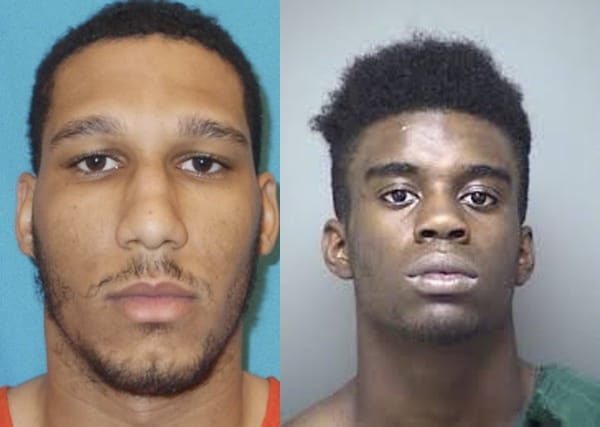 Anthony Shelton (above, left), 20, and Cameron Ajiduah, 19, were sentenced to 20 and 15 years in prison, respectively.

In May, a grand jury returned an 18-count indictment against Shelton, Nigel Garrett, Chancler Encalade, and Ajiduah for four separate home invasions in Plano, Frisco and Aubrey between January 17th and February 7th, 2017.

Anthony Shelton, 20, and Cameron Ajiduah, 19, were sentenced today to 20 and 15 years in prison, respectively, for assaulting a man because of the victim’s sexual orientation, in violation of 18 U.S.C. § 249, announced the Justice Department’s Civil Rights Division, the U.S. Attorney’s Office for the Eastern District of Texas, and the U.S. Bureau of Alcohol, Tobacco, Firearms, and Explosives’ Dallas Division.

According to the plea agreements, Shelton and Ajiduah both admitted that they and another defendant, Nigel Garrett, used Grindr, a social media dating platform for gay men, to arrange to meet the victim at his home. Upon entering the victim’s home, the defendants restrained the victim with tape, physically assaulted him, and made derogatory statements about the victim’s sexual orientation.  The defendants brandished a firearm during the home invasion, and they stole the victim’s property, including his motor vehicle.

A federal grand jury previously had returned an eighteen-count superseding indictment that included charges for hate crimes, kidnappings, carjackings, and the use of firearms to commit violent crimes. The indictment also charged Shelton, Ajiduah, along with other defendants, Nigel Garrett and Chancler Encalade, with conspiring to cause bodily injury because of their victims’ sexual orientation during home invasions in Plano, Frisco, and Aubrey, Texas, from Jan. 17 to Feb. 7, 2017. All four defendants subsequently pleaded guilty to hate crime charges from this indictment, and admitted that they targeted victims because of their sexual orientation. Earlier this year, Garrett was sentenced to 15 years in prison, and Encalade was recently sentenced to 10 years in prison.

“The Department of Justice will not tolerate any act of violence targeting individuals based on their sexual orientation, gender identity, race, color, religion, disability, or national origin,” said Acting Assistant Attorney General John Gore of the Civil Rights Division. “The Department will continue to investigate and prosecute hate crimes cases.”

“This case highlights the danger of the internet and specifically, online apps,” said U.S. Attorney Joseph D. Brown for the Eastern District of Texas.  “In this case, the defendants misused the internet for sinister purposes in order to target an innocent man based on his sexual orientation, causing him bodily harm and damage to his property.”

The investigation was conducted by the U.S. Bureau of Alcohol, Tobacco, Firearms, and Explosives, the Plano Police Department, and the Frisco Police Department.  The case was prosecuted by Assistant U.S. Attorney Tracey Batson of the U.S. Attorney’s Office for the Eastern District of Texas and Trial Attorney Saeed Mody of the Civil Rights Division.

Previous Post: « It’s ‘Now or Never’ for RuPaul’s Drag Race Queen Blair St. Clair in New Video with Max Emerson and Jinkx Monsoon: WATCH
Next Post: Kylie Minogue Paled in Comparison to Some ‘Robust’ Drag Queens Dressed as Her: ‘I Was the Least Kylie of All the Kylies’ »