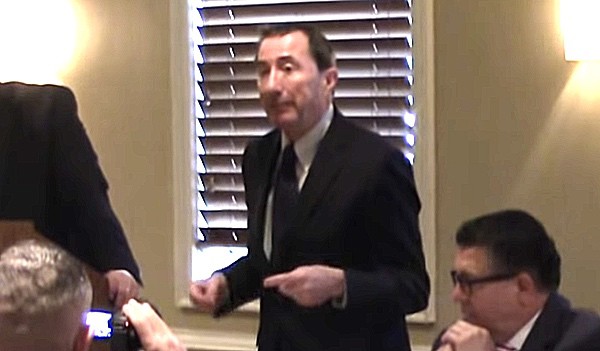 Seth Grossman, the pro-Trump GOP ‘MAGA’ candidate in New Jersey’s Second Congressional District, was captured on video at a forum telling a group of New Jersey Constitutional Republicans that “in my view, the best way to bring diversity to the Republican Party is for Republicans to openly say that the whole idea of diversity is a bunch of crap and un-American”

“Now what diversity has become,” explained Grossman, “is an excuse by Democrats, communists, and socialists, basically, to say that we’re not all created equal; that some people, if somebody is lesser qualified, they will get a job anyway, or they’ll get into college anyway, because of the tribe that they’re with, what group, what box they fit into. You know, women, African American, Hispanic; they’re chopping us up in these different pieces and getting us fighting against each other instead of spending our time saying everybody should be judged by their own talent.”

Grossman added: “Once we say that the Republicans want these traditional ways that made America great for all these years, then maybe African Americans would realize when we enforce our immigration laws, there will be more opportunity for Americans of all backgrounds. When we talk about women saying, well, we need special care for child care, we need this credit and that credit, say, wait a minute, when America was great, one parent alone earned more than enough money to comfortably support a family. That’s what happened before we chopped Americans into these different boxes and saying, I’m entitled to something because I’m part of this group.”

Grossman stood by his remarks on Monday: “I believe in America that each individual should be judged on nothing but his or her talent, character and hard work. I’m rejecting the whole premise of diversity as a virtue.”

Previous Post: « ‘Queer Eye’ Season Two, ‘The Bold Type’ Returns, ‘Legion’. ‘Pose’ and More TV This Week
Next Post: Seth Meyers on Trump’s Justin Trudeau Feud: ‘How Do You Get in a Fight with Canada?’ – WATCH »