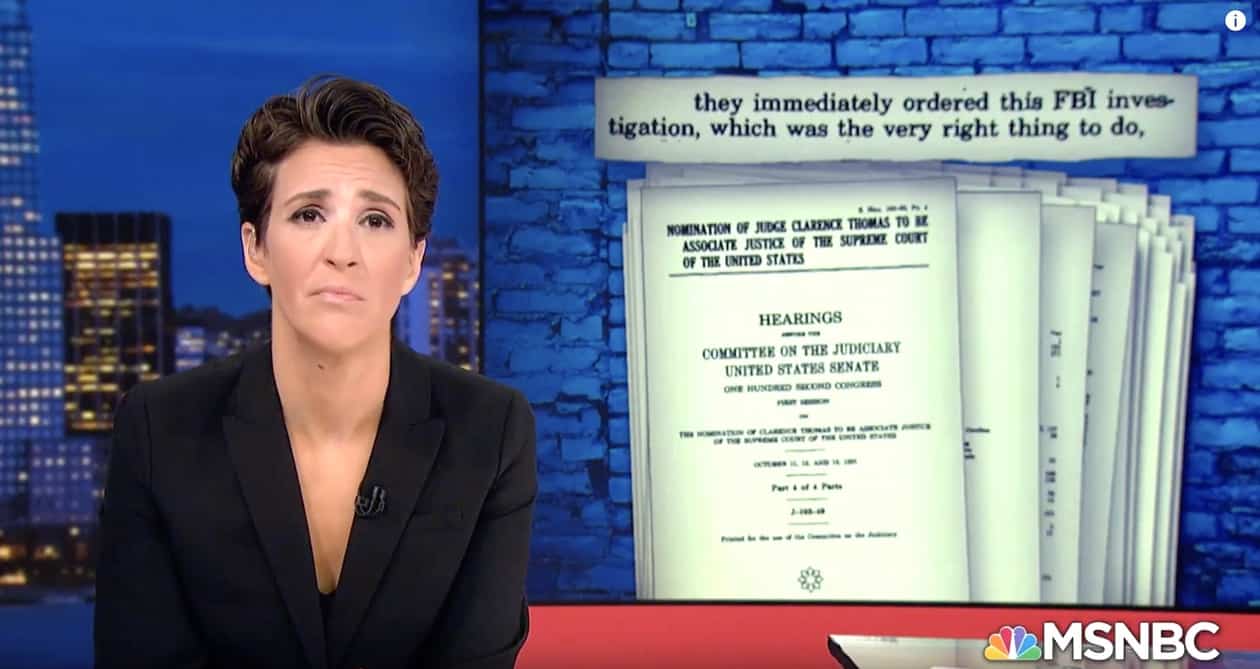 Rachel Maddow took a look at the FBI’s history of investigating Supreme Court nominees and wonders why Republicans are putting up such a fight when Brett Kavanaugh’s accuser is begging for FBI scrutiny of her sexual assault claims.

Said Maddow: “The FBI looking into new alleged derogatory information about a nominee – that’s the bread and butter of what the FBI does with background checks on nominees. Stopping the FBI from doing this is a big break from precedent and nobody knows why the Republicans are doing it. As of tonight it remains unclear as to whether or not professor Christine Blasey Ford will testify to the Judiciary Committee on Monday or at any other time, since the Republicans on the committee and the White House seem to be digging in their heels and insisting that there can be no FBI investigation of her claims despite the fact that that would be standard practice for an issue like this.”

She added: “When it comes to predicting what’s going to happen here we’ve got these two very interesting things playing out side by side, neither of which you would expect, right, but both of which are now happening. On the one hand we’re still waiting for some sort of credible explanation from Republicans and the White House as to why this case is so special, why they are so invested in making sure that the FBI doesn’t look into this. The argument that this isn’t what the FBI does is factually incorrect, it’s absolutely not true, that can’t be the reason. If that’s not the reason, then what is the reason that they’re so desperate to not have the FBI look at this?”

But there’s a flipside, Maddow added, that makes it even more bizarre: “So that’s happening. And then parallel to that when it comes to assessing the credibility of this accusation we are now in this sort of remarkable situation where the woman who has brought forth this allegation is now begging for FBI scrutiny of her claims. She has made a claim against Judge Kavanaugh. Judge Kavanaugh’s supporters do not want any law enforcement agency looking into it. She on the other hand is begging the nation’s premier law enforcement agency to look into it. She’s not just inviting scrutiny of her claims, she’s doing everything she can to try to get independent federal law enforcement scrutiny of her claims…If you were making something up, if you were going to tell a high-stakes lie because you wanted to take something out for whatever reason, would you beg the FBI to look into it? It’s a crime to lie to the FBI. Why would you ask for FBI scrutiny if you had any doubt about your own story?”