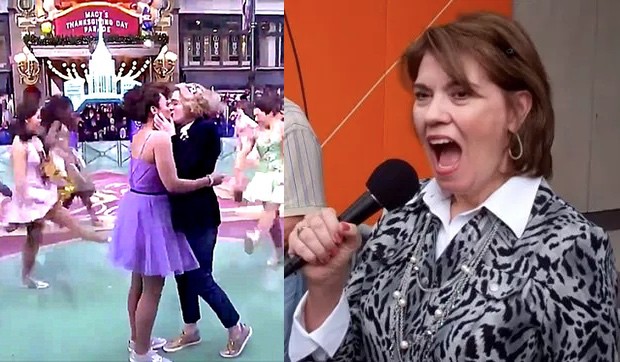 Linda Harvey, the anti-LGBTQ activist who leads the group Mission America, called for a boycott of Macy’s after it allowed a same-sex kiss in the Thanksgiving Day Parade.

Caitlin Kinnunen and Isabelle McCalla, lead actors in Broadway’ The Prom musical, made Macy’s Thanksgiving Day Parade history on Thursday by sharing its first same-sex kiss, broadcast to millions of viewers across the U.S..

Writes Harvey, writing on the right-wing rag Lifesite: ‘This agenda is like an airborne infection that’s suddenly everywhere. From “LGBT” affirming church youth groups, to “gay”-affirming anti-bullying school lessons, to rainbow “pride” apparel sold at Target and Walmart during the spring and summer, to the obligatory pro-homosexual article in the daily newspaper, to disturbed transvestites reading to preschoolers in libraries. It seems to be critically important to stick it to our children, all in the name of phony “tolerance” and “acceptance,” embracing sins leading to personal disaster, societal destruction and spiritual death’

Check out the Macys kiss here.

She adds: ‘God never makes any human to engage in what He has called an “abomination,” and always shows a way out for those who seek His loving, merciful transformation from lives of sin to lives of sanity and virtue. His design for human sexuality and marriage is beautiful and should be celebrated as a tremendous blessing on Thanksgiving. But instead, even this traditional icon of Americana, the Macy’s Thanksgiving Parade, is being co-opted by whitewashed depravity….I am grieved for America and all the lost people, especially the young. I mourn the simple sweetness of mom/dad families and uncomplicated friendships, of holidays that cultivated wholesome childhood unmarred by the shadow of hateful, sexual fascism. Despite the victory that is in Jesus Christ and our ultimate destiny, before that glorious appearing, the night is coming.’

Harvey tells people, “do not shop at Macy’s this Christmas season” and hold your children close.”

Harvey has previously warned of LGBTQ using Halloween as a recruitment tool: ‘“In today’s America, we are allowing ourselves to be deceived by the depraved demands of hardened lesbians and men in lipstick. October 31 symbolizes the happy rebellion. And many of those involved in homosexuality or gender pretense really do get this, and don’t care. They aren’t simply joining another parade and strutting an outrageous ensemble – and the drag kings and queens certainly do that. But it’s the night for permitted release of all inhibitions as they “come out” in the “spirit” of the event.”’

Read more insanity on her over at GLAAD.