Florida Governor Charlie Crist today said that the Republican Party should not spend any more money funding groups pushing for a proposed constitutional ban on gay marriage in that state. 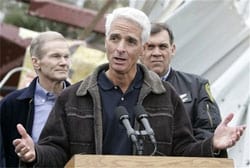 Said Crist: ”I just think [the Republican Party’s] money can be better spent on other things that may be more pressing, like elections, for example. I think that the people care about issues like insurance premiums. They care about property taxes. They care about public safety. And I think it’s important that not only those of us in government — but the party — focus on those issues, too.”

Crist, who has both signed the petition opposing gay marriage and publicly endorsed it, expressed conflicting opinions on the topic in the run-up to the November elections.

There may be other reasons why Crist is trying to turn his party’s focus away from gay issues. During Crist’s recent campaign for governor, his independent opponent Max Linn called on Crist to come out of the closet, saying “”it is common knowledge in Tallahassee that Crist is gay.”

Crist has denied the claims, telling a reporter for Florida’s New Times that he has “never” had sex with a man.

And Florida’s previous governor Jeb Bush deflected questions about sexuality on Crist’s behalf last November, telling a reporter who dared to ask the question: “Put a smile on your face and don’t be such a horse’s ass.”

Max Staver, an attorney who argued for the amendment before Florida’s highest court, told the Miami Herald: “Charlie Crist has his priorities misplaced if he thinks it’s not money well spent. It’s one of the most important issues government can face. It deals with the marriage and the family.”

Of course the reason he’s decided marriage doesn’t deserve protection may be that Charlie Crist’s first priority is to protect himself.