Ted Haggard escort Mike Jones talks to Deborah Solomon in the NYT magazine: “I’m really not this left-wing liberal like some people have tried to paint me. I think I’m very moderate. I’m a registered Democrat, but I’ve voted Republican. I voted for Bush in the last election.” 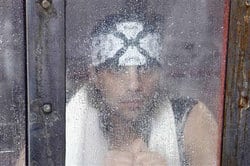 Magician Criss Angel begins 24-hour Times Square cement box stunt: “About 100 fans gathered in the rain to watch the spectacle in a parking lot just off Times Square, the same spot where U.S. magician David Blaine spent two days in November shackled to a gyroscope hoisted in the air before escaping. Angel, 39, sat in a four-foot (1.2 meter) square clear box slowly being encased in cement that was suspended 12 feet above the ground as he spoke to reporters and fans. The box will be lifted to 40 feet later on Monday and Angel will try to escape on Tuesday morning before the box is sent plunging to the ground.” 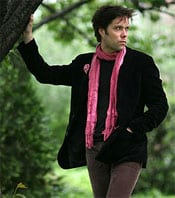 Rufus Wainwright: “I do feel like I live a fabulous life. And I know that’s why a lot of the critics get so mad at me sometimes, because they’re just really jealous.

California Department of Corrections and Rehabilitation has begun allowing conjugal visits for gay and lesbian inmates registered as domestic partners: “The change will allow gay and lesbian inmates the same rights as other inmates, who are eligible to spend up to three days with family members in living areas — usually trailers — on prison grounds. Corrections officials say they are responding to legislation signed by former Gov. Gray Davis that awarded more rights to registered domestic partners and prohibited state agencies from discriminating against domestic partners…The changes were prompted by complaints from Vernon Foeller, 40, who was serving a 20-month sentence, convicted of attempted burglary, at the California Medical Facility in Vacaville. Foeller’s request to have his domestic partner visit him last summer was denied, leading him to contact the ACLU.”

Rosie O’Donnell is in Celebrity Detox. 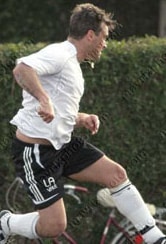 William Silver, the first openly gay man to apply for ordination in the Methodist Church, has died at 59 of complications from AIDS: “A grandson of Presbyterian missionaries in China, Mr. Silver hoped to follow them into the ministry when he entered the Union Theological Seminary in Manhattan in 1969. It was in his final year there, in 1973, that he came to terms with his homosexuality. Two years later, when applying to the Presbytery of New York for ordination as an assistant pastor at the Central Presbyterian Church on Park Avenue and 64th Street, he shocked committee members interviewing him by saying he was gay. ‘It was like electricity had been sent through members of the committee as they sat upright, and we really didn’t know what to do,’ Byron Shafer, one of the committee members, recalled in an oral history interview.”

Death of American math genius Scott Johnson 20 years ago off Sydney Australia’s North Head being investigated as murder by anti-gay gangs: “In 2004 Coroner Jacqueline Milledge ruled that violent gangs preying on homosexuals probably hurled three of the group to their deaths at Marks Park, overlooking Bondi Beach. She also determined that gay bashings in the park were common and that similar attacks might have occurred at gay beats at Alexandria and Randwick. Spurred by the findings, Johnson’s brother Steve has hired US investigative journalist Daniel Glick and retired NSW detective John McNamara to determine if the same scenario occurred on Sydney’s northern beaches.”

Fashion designer Thierry Mugler becomes “Manfred” in extreme makeover. WARNING: Not safe for work at all.