Watch: Fantastic Follow-Up On Gay Belgian Couple Reunited With Son Kept From Them For Years In The Ukraine - Towleroad Gay News 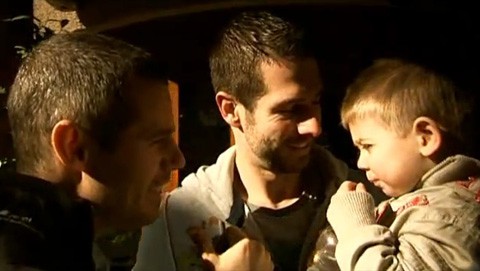 Here's a really good update on a story we were following earlier this year.

Laurent Ghilain and Peter Meurrens, a Belgian couple living in Southern France, had been separated from their son Samuel, whom they had through a surrogate, for two years and three months because the Belgian embassy in Kiev refused to issue Samuel a passport due to restrictive surrogacy laws and anti-gay officials in Belgium. Samuel had been living in a Ukrainian orphanage while they fought for his release.

Laurent and Peter were reunited with Samuel in late February. Samuel has been with them for four weeks at this point.

The dads say that the first few days he was home Samuel would put food in his pockets probably because he was used to not getting food for the rest of the day at the orphanage. He also spontaneously wet himself when a news crew from the Ukraine showed up and he heard their dialect.

Their son has a lot of adjustment to go through but it's apparent he's in great hands with Peter and Laurent.