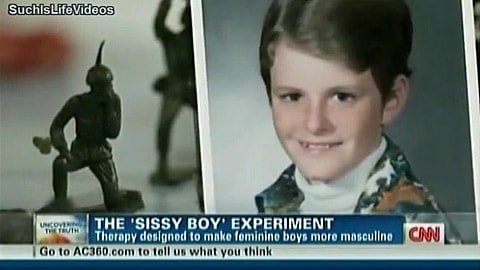 "In 1970, a five-year-old boy named Kirk Murphy was subjected to an ex-gay experiment. Under the care of Dr Ivor Lovaas and George Rekers, then a doctoral student, of UCLA, he underwent therapy to eliminate supposed effeminate behaviors. In 1974, Lovaas and Rekers jointly published a paper about the boy they renamed "Kraig," heralding his treatment for "childhood cross-gender problems" a success and claiming he had been transformed from a gender-confused homosexual-in-waiting to a healthy, heterosexual young man. On the back of this study, Rekers built a career as an anti-gay activist and a supposed expert in childhood sexual development. He co-founded the Family Research Council and championed reparative therapy to turn gay men straight. In 2003, Kirk, aged 38 years old and gay, committed suicide."

Watch the heartbreaking and infuriating report, AFTER THE JUMP…

As you may recall, the State of Florida spent hundreds of thousands of dollars hiring Dr. George Rekers as its star witness in the case against adoption by gays in Florida.

Florida's hiring of Rekers by Attorney General Bill McCollum made headlines after Rekers, who built his career out of this damaging "ex-gay" therapy, was discovered returning from vacation in Florida with a rent boy he had brought with him.