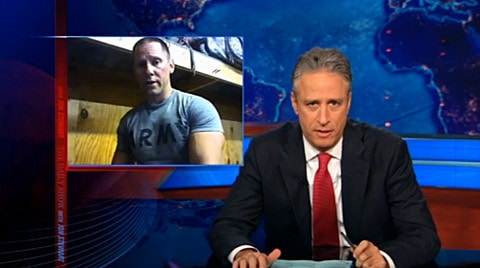 As he returned last night, last week's GOP debate provided Jon Stewart with plenty of material to blast, first and foremost the debate audience's booing of a gay soldier serving in Iraq.

"I give the audience a lot of credit. It takes a lot of balls to boo a guy who could stick your head in his biceps and crack it like a walnut."

Stewart also took Rick Santorum to task for his announcement that he would reinstate 'Don't Ask, Don't Tell'.

"What planet do you f**king live on?"

Watch Stewart go to town, AFTER THE JUMP…

More Stewart, on how the Republican primary is like a season of American Idol in reverse, where candidates keep getting added:

Previous Post: « Patti Stanger Apologizes, Then Repeats Her Poisonous View of Gay Relationships to Joy Behar: VIDEO
Next Post: Sean Avery Was Called a ‘F**king Faggot’ on the Ice. Will the NHL Care? — VIDEO »