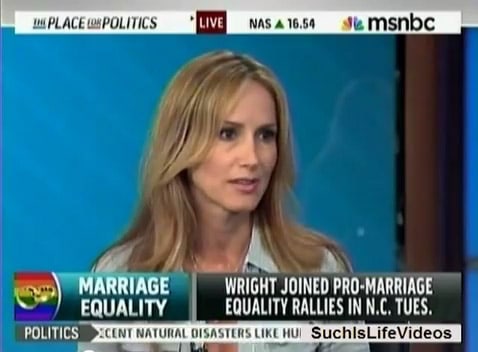 Country singer Chely Wright, who attended rallies in North Carolina against the anti-gay amendment which lawmakers this week approved to go on the ballot there in May 2012, talked to MSNBC anchor Thomas Roberts about the measure today, calling it "disgusting" and a "sucker punch to the LGBT community."

I've posted two additional videos, one an ABC 11 report following the measure's passage, and another clip (via Think Progress LGBT) of North Carolina state senator Doug Berger (D) comparing the amendment to putting a pink triangle into the state's constitution.

In Nazi Germany, some of you may not realize that Adolf Hitler came to power through the ballot box and even though he was elected by the people, he was able to use the instruments of power to take away the rights of individuals….[I]f you were gay, you were required to wear a pink triangle to single that you were a member of that despised group. Now, I believe that if we pass this motion to concur, we are essentially putting a pink triangle into our state constitution.

(thanks to Dave Evans for the Wright clip)