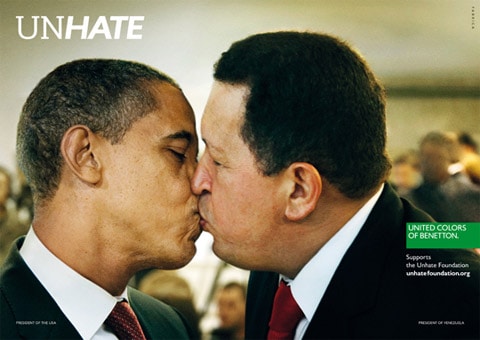 Yesterday, we reported that the Vatican threatened Benetton over its use of an image featuring the Pope kissing an Iman, in the brand's new unHATE campaign.

Others are furious too. 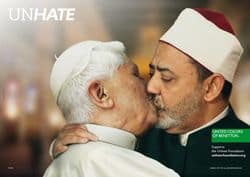 Right-wing bloviator Dr. Keith Ablow, who was last in the headlines for suggesting that Chaz Bono's participation in Dancing with the Stars would make tomboy girls want to switch genders, is telling people they should be "outraged", mostly because the ads are so gay:

If you are heterosexual, if you are a leader who believes your position demands decorum, if you are a person of substance who believes you should be valued for your mind, not just your sexuality, if you think that countries and religion deserve respect, not ridicule, you were attacked today by Benetton. You felt it. And you shouldn't be talked
out of your outrage. 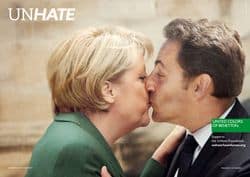 The only psychological interpretation of such ads that makes sense to me as a psychiatrist is that the corporate leaders at Benetton literally believe that homosexual sex between world leaders — or at least homosexuality, as an orientation — would lead to world peace. They have tipped their collective hands as a company and indicted marital fidelity, faith and heterosexuality, labeling them the real sources of hatred and suffering around the globe. In the collective mind of Benetton, if religious leaders and political figures would just have sex with one another all would be well…

"The White House has a long-standing policy disapproving of the use of the president's name and likeness for commercial purposes," deputy press secretary Eric Schultz said in a statement."

So in less than a week, Benetton infuriates The Pope, The White House, and FOX News and made it on the pages and screens of every news outlet in the world.

No doubt those behind the "unHATE" campaign are slated for promotions.

And if you missed the campaign's beautiful video, check it out, AFTER THE JUMP…