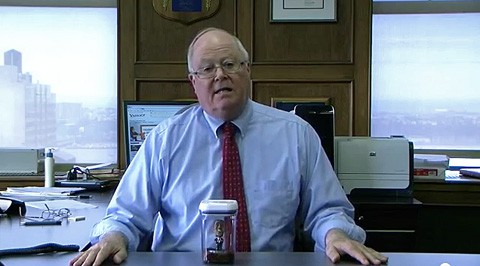 Bill Donohue, the mouthpiece of the Catholic League, whose anti-gay crusades have include getting a gay Smithsonian art show censored, wrongly scapegoating gays as the problem for sexual abuse in the Catholic church, campaigning against gay adoption, condemning Kathy Griffin, slobbering over gym bodies, and attacking Towleroad, has found a new crusade, and it's the return of Andres Serrano's controversial work of art "Piss Christ", a photograph of a crucifix submerged in the artist's urine.

Donohue has responded with his own work of art, a bobblehead of President Obama in a jar with feces (Donohue claims it's Play-Doh) and says he wants to sit down with Serrano and find out how he can get a $50,000 grant too.