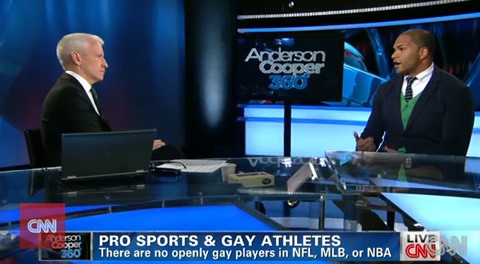 Former Baltimore Raven linebacker Brendon Ayanbadejo sat down with Anderson Cooper last night for a nice interview about his work in LGBT rights advocacy. Anderson asked him what propelled him to be an ally, what he hears in the locker room, whether his own sexuality is questioned in the process of fighting for equality, and about those rumors of the 4 NFL players planning to come out. 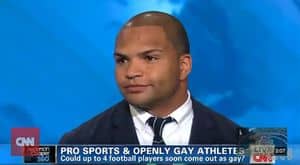 Ayanbadejo tempers expectations a bit on his more precise statements earlier, and the idea of a 'fantastic four' of gay football players now seems much more hypothetical.

What we want to facilitate is getting them all together so they can lean on each other, so they can have a support group. And potentially, it's possible, it's fathomable, that they could possibly do something together, and break a story together. And one of them had voiced that he would like to break his story with someone else and not do it alone….Not all these athletes are in the NFL. Some are in other sports as well.

Previous Post: « CNBC Host Challenges Eric Cantor on Gay Marriage: ‘No One’s Asking You to Marry Another Guy’
Next Post: Senator Mark Pryor (D-AR): I’m ‘Undecided’ on Marriage Equality But Do Believe Being Gay is Not a Choice »