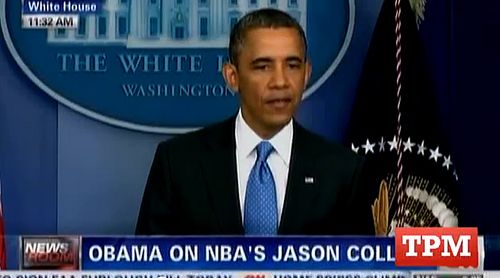 President Obama finished a press conference this morning and began leaving but then returned to the podium to say he was proud of NBA center Jason Collins.

"I had a chance to talk to him yesterday. He seems like a terrific young man. I told him I couldn't be prouder. One of the extraordinary measures of progress that we've seen in this country has been the recognition that the LGBT community deserves full equality, not just partial equality, not just tolerance, but a recognition that they're fully part of the American family. And given the importance of sports in our society, for an individual who's excelled at the highest levels in one of the major sports to say, 'This is who I am, I'm proud of it. I'm still a great competitor. I'm still 7 foot tall and can bang with Shaq and deliver a hard foul.'

And you know, for, I think, a lot of young people out there who are gay or lesbian who are struggling with these issues, to see a role model like that who is unafraid, I think this is a great thing. And I think Americans should be proud that this is just one more step in this ongoing recognition that we treat everybody fairly and everybody's part of a family and we judge people on the basis of their character and their performance and not their sexual orientation. I'm very proud of him."

Previous Post: « Jason Collins and the Legal Power of Identity
Next Post: Andy Roddick, Mardy Fish Speak Out Against Homophobia in Sports »