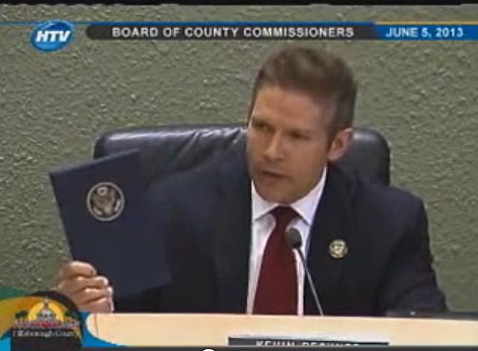 As I mentioned in my previous post, Tampa's Hillsborough County yesterday voted 7-0 yesterday to repeal a hideous discriminatory statute that banned recognition of Gay Pride by the county.

Gay Hillsborough County Commissioner Kevin Beckner ripped those who put it in place a new one yesterday with a powerful speech that earned him a rousing ovation.

Said Beckner, holding up a copy of the Constitution: "What does it say to a community when its own government sanctions discrimination against a class of its  citizens? Does it give authority to others to discriminate against their fellow human beings? What about our children? Our children who go to school every single day that are subject to bullying simply because who they are as human beings. Does it give children the authority to bully and to put down their fellow classmates because government has said it's ok to do so? Ladies and gentleman, that is the real cost that this policy has to this community."

Watch his remarks, AFTER THE JUMP…