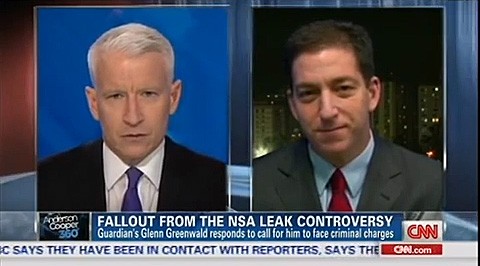 Rep. Peter King (R-NY) fabricated accusations that Guardian journalist Glenn Greenwald was threatening to expose the identities of CIA agents as reason for his arrest over the NSA surveillance story, parts of which Greenwald broke.

Greenwald admitted he was "really staggered" that a member of Congress, let alone the chairman of the House Homeland Security Committee, would "fabricate" this information calling for Greenwald to be arrested and tried for "the crime of doing journalism." Cooper noted that King's office declined to comment, and asked if any of Greenwald's future revelations will reveal the identities of anyone in the field. Greenwald insisted it will not, and defended Edward Snowden as, contrary to popular belief, actually taking national security into account in deciding to reveal the classified information.

Watch Greenwald speak to Anderson Cooper about the threats, AFTER THE JUMP…