GOP presidential hopeful Ted Cruz was in Beaumont, Texas yesterday, where he received a round of questions from reporters on gay rights, the Washington Post reports. 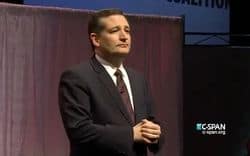 "Is there something about the left — and I am going to put the media in this category — that is obsessed with sex?” Cruz asked after fielding multiple questions on gay rights.

Cruz then pivoted and pointed at someone else:

“ISIS is executing homosexuals — you want to talk about gay rights? This week was a very bad week for gay rights because the expansion of ISIS, the expansion of radical, theocratic, Islamic zealots that crucify Christians, that behead children and that murder homosexuals — that ought to be concerning you far more than asking six questions all on the same topic.”

Cruz then attacked the encroachment of "mandatory same-sex marriage" as a threat to religious liberty.