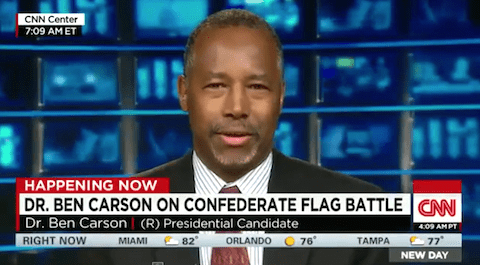 Republican presidential candidate Dr. Ben Carson appeared on CNN’s New Day Wednesday morning to discuss the racist nature of the confederate flag and its association with Charleston shooter Dylann Roof, but he found himself flustered when host Chris Cuomo confronted him about his thoughts on the confederate and gay pride flag comparison controversy.

Dr. Carson has expressed concerns in other interviews regarding gay marriage, fearing that changing the definition of marriage for one group would urge other groups to ask for marriage rights, using bigamists as one example. Given his views on gay marriage, it’s apparent why Carson deflected Cuomo’s question, especially considering one of their previous interviews together led to Carson making the ridiculous “prison turns people gay” argument.

Watch Carson become terse with Cuomo on the subject below:

Previous Post: « Larry Kramer Reads from ‘The American People: Volume 1: Search for My Heart’
Next Post: The OXD Mirror: Deep Into The House with Bodhi, Jacques Renault and More »