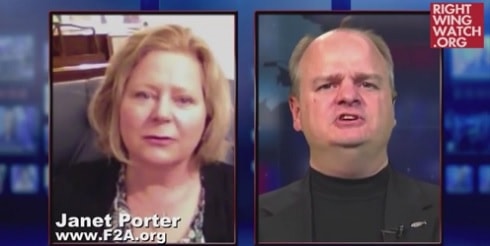 Porter – who is willing to suffer headaches to thwart Tylenol’s pro-gay stance – was appearing on demon-obsessed Gordon Klingenschmitt’s “Pray In Jesus’ Name.”

“We have, at this moment, freedom hanging by a thread.

“If the Supreme Court rules wrong, if they homosexualize marriage, with the homosexualizing of marriage comes the criminalization of Christianity. That’s what is at stake.”

Earlier this year, Klingenschmitt said that 20 percent of the U.S. population will be gay next century because of gay “recruitment.”