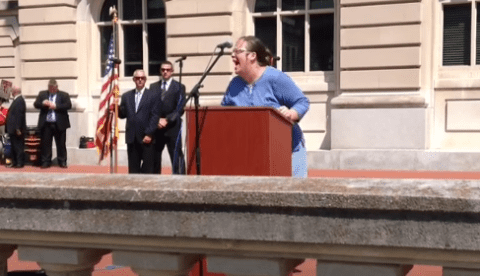 It was just last week that notorious anti-gay Rowan, County, Kentucky clerk Kim Davis filed an emergency motion with the U.S. 6th Circuit Court of Appeals, asking the justices to exempt Davis from having to issue marriage licenses to same-sex couples because Jesus.

Now, the 6th Circuit Court of Appeals has weighed in and the results are not good for Davis.

The 6th Circuit Court of Appeals has denied a request from Rowan County Clerk Kim Davis to stay a federal injunction that called on her to provide marriage licenses to same-sex couples.

Judges found that “it cannot be defensibly argued that the holder of the Rowan County Clerk’s office, apart from who personally occupies that office, may decline to act in conformity with the United States Constitution as interpreted by a dispositive holding of the United States Supreme Court. There is thus little or no likelihood that the Clerk in her official capacity will prevail on appeal.”

Read the 6th Circuit’s ruling below: