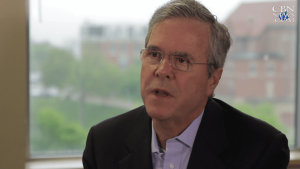 “Look around this room,” a man told Bush, who spoke to a mostly white crowd. “How many black faces do you see? How are you going to include them and get them to vote for you?” asked the man, who was white.

Bush pointed to his record on school choice and said that if Republicans could double their share of the black vote, they would win the swing states of Ohio and Virginia.

“Our message is one of hope and aspiration,” he said at the East Cooper Republican Women’s Club annual Shrimp Dinner. “It isn’t one of division and get in line and we’ll take care of you with free stuff. Our message is one that is uplifting — that says you can achieve earned success.”

In a separate WaPo article, Philip Bump broke down why Bush’s “free stuff” argument about black voters is so off-the-mark.

Previous Post: « Kim Davis Announces She and Her Family are Now Republicans
Next Post: Stephen Colbert Has A Special Message for the Pope: WATCH »