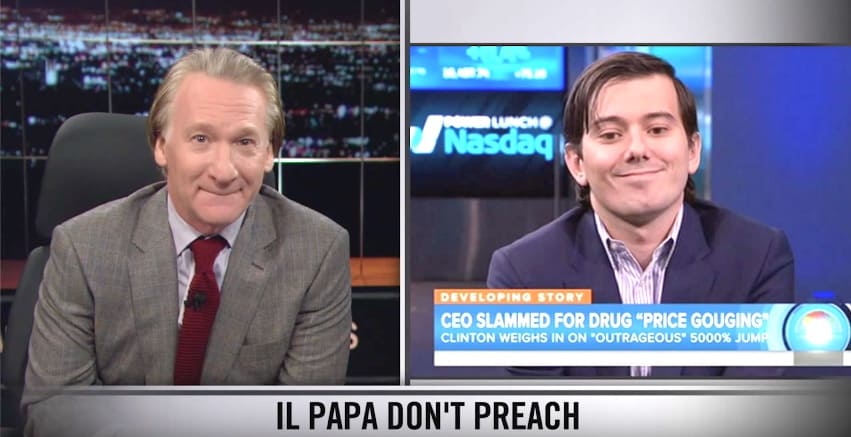 In his New Rule last night, Bill Maher argued that far-right Christians believe in very little of what Jesus Christ actually said, and the Pope’s recent visit proved that.

Jesus isn’t the face of conservative Republican values, Maher explained. More like Martin Shkreli, who recently jacked the price of an AIDS drug up 5400% and then promised to lower it when the public outrage got out of control.

Not that Shkreli is unusual for the pharmaceutical industry. 15 years ago cancer drugs cost an average of $10,000 a year. Now it’s $10,000 a month. Because this cartel owns the U.S. government every bit as much as Mexican drug lords own theirs. To all the conservatives who still parrot the line that Obamacare is a government takeover, please then explain why guys like Martin Shkreli are still calling the shots. He’s not a bureaucrat who works for the government. He’s a hedge fund manager who works for the devil.

Previous Post: « Vatican Fires Priest After He Comes Out as Gay, Criticizes Church in Italian Paper: WATCH
Next Post: Will Anti-Gay Archbishop Carlo Maria Viganò Be Shown the Door After Kim Davis Meeting? »