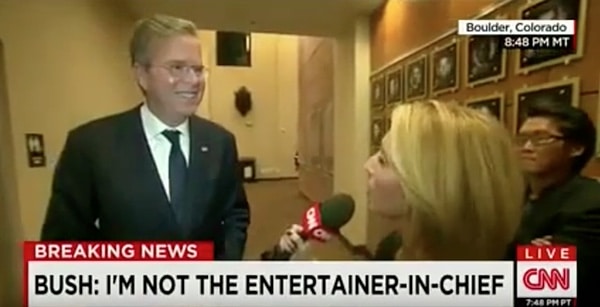 Bush was shut down by Rubio after going after Rubio’s attendance record in the Senate.

Said Bush: “I mean literally, the Senate, what is it, a French work week? You get like three days where you have to show up. You can campaign or just resign and let somebody else take the job.”

But Rubio got the moment: “I don’t ever remember you complaining about John McCain’s vote record. The only reason why you’re doing it now is because we’re running for the same position and someone has convinced you that attacking me is going to help you.”

Jeb both denied being frustrated and said he isn’t a performer: “If they’re looking for entertainer-in-chief I’m probably not the guy.”

He also said he wants to run “an old fashioned” campaign and can’t be bothered with social media, where his rival Donald Trump has 4.7 million followers:

Bash then asked Jeb if he thought there were “gotcha” moments in the debate, and he said yeah, just like the other debates.

“Except for CNN,” Bash interjected.

Replied Bush, chuckling under his breath: “Am I laughing out loud?”