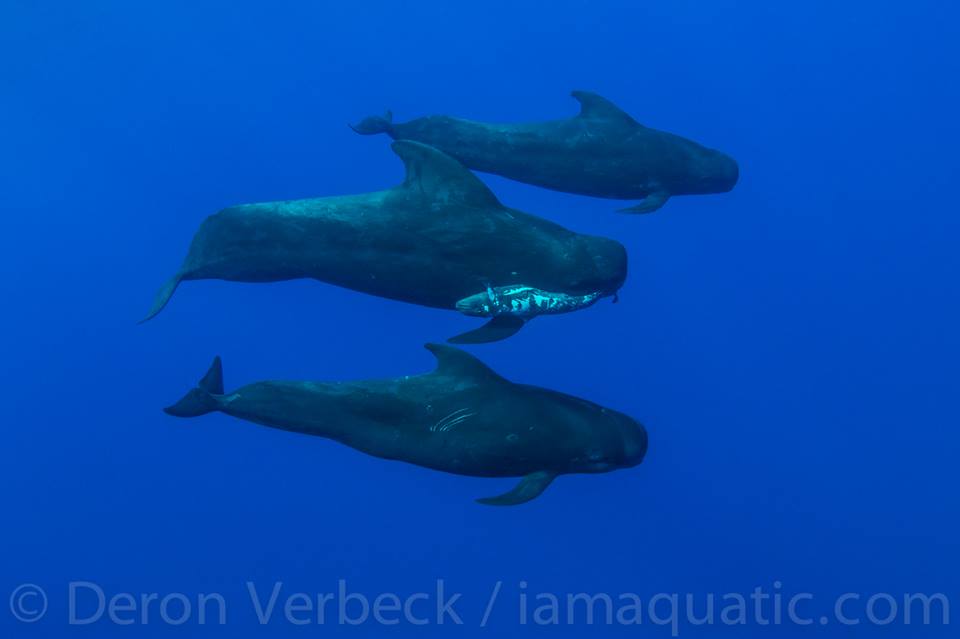 Whales are complex emotional and intelligent creatures, a fact completely evident in this photo shot by Deron Verbeck of a male short-finned pilot whale swimming with two females, and holding a dead calf in its mouth.

I’m just going to call this “The Procession”.

Back in July I had the pleasure and honor of meeting and working with Brian Skerry world renowned National Geographic photographer. We came upon a scene that he, Jeff Hester, Scott Blain and I were the only humans to witness that day. We only did a couple drops just to document the encounter and then left them alone to mourn. I didn’t call anyone else out of respect for the animals to be left in peace.

There have been many reports and photo documentation of whales and dolphins carrying and “mourning” their dead offspring, but for me this was the first time I had encountered it. It was a pretty heavy and heart wrenching scene as the whales slowly passed by carrying their dead calf.

All three animals have been ID’d by Robin Baird of Cascadia Research Collective. What he knows is that they are all from the same “social group”. What he believes is that (from top to bottom in the image) the top animal is the adult mother of the bottom animal (although no genetic samples have been taken they have been photographed numerous times side by side since 2008 and mothers and female calves will stay together their entire lives) and the dead calf is the first offspring of the bottom animal. The bull that is carrying the calf may or may not be the biological father (only genetic sampling would have proved that). It is rare (but not unheard of) for the bulls to carrying the calves and there are very few images of this.

The photo was shot off of Hawaii’s Big Island in July.