You are here: Home / John Oliver Has a Potent List of Reasons to Get Rid of the Penny: WATCH 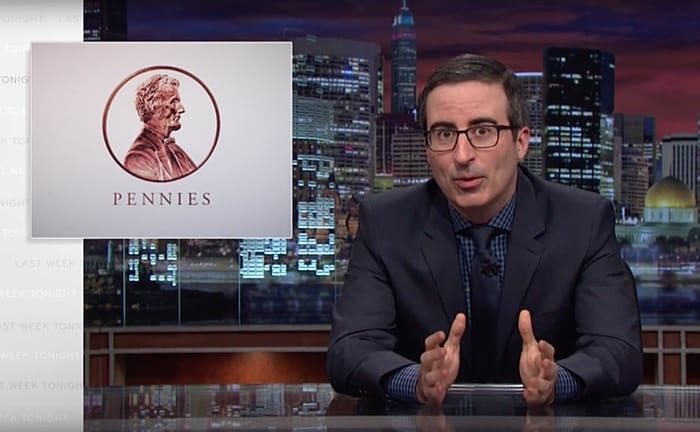 The John Oliver penny campaign is on.

The penny is not even worth what it costs to make: 1.7 cents to make 1 cent. John Oliver takes on the problem in a hilarious new segment for Last Week Tonight.

He also demonstrates that people won’t pick pennies up on the sidewalk, people throw them in the garbage, private businesses don’t want them, they are dangerous for dogs, and people even put them up their butts for fun after chilling them in the refrigerator for 2-3 hours.

Oliver also mocks the penny lobby, a fan group for the useless coin, which has this to say on its website:

The penny continues to enjoy overwhelming support from a majority of Americans, and for good reason. It plays an important role in our everyday lives and in our nation’s economy, and alternatives have consumer and social costs. Consumers benefit with a low denomination coin, with the penny helping keep high prices in check for millions of America’s hardworking families. The penny also fuels charitable causes, allowing America’s wonderful charities to raise millions of dollars. By contrast, eliminating the penny would increase spending for many federal government programs, causing inflationary pressures, and it wouldn’t save money.

“There are certain things we know are impossible to get rid of: terrorism, herpes and Guy Fieri. But the penny is a nuisance we can actually do something about. So let’s do it, America. Let’s get the penny out of our pockets, out of our dogs, out of our fridges, and out of our asses. We can do this!”