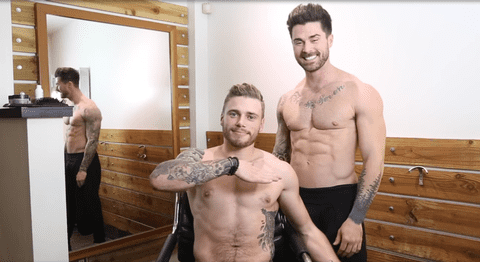 Gus Kenworthy continues his rainbow tour since coming out as gay on the cover of ESPN magazine in a new video with noted hairstylist and social media star, Kyle Krieger. True to both guys’ social media personas, the video includes a healthy dose of shirtlessness.

The video is part of Kriefer’s unCUT series in which he cuts guys’ hair and asks them, are you cut or uncut? 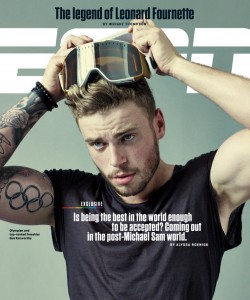 As “gay man’s therapy” gets underway, Krieger eases Kenworthy into the conversation with some softball questions before getting to the titular question. Of his favorite memory of the Sochi Olympics, Kenworthy says it was the medal ceremony after winning the silver medal in which the two other medal winners were also from Team USA. And as for whether he’s cut or uncut? “I’m uncut. I was born in the UK,” Kenworthy says.

Turning to the subject of his coming out “as the first gay action sport superstar ever in life”, as Krieger puts it, Kenworthy talks about what he hopes the impact of his publicly coming out will be:

“I hope that me coming out and my cover helps push the world and sports especially to a place whee it isn’t a big deal to come out. I don’t think it should be newsworthy, I don’t think that it should warrant a cover…I didn’t have a role model when I was a kid and I think if there had been someone that I was really excited about and I looked up to and they had been openly gay and had been cool with it, I think it would have helped me a lot.”

As for what he would tell LGBT people in the closet, Kenworthy says, “The people that can’t accept it or don’t embrace it are kind of people you don’t really want in your life anyway.” 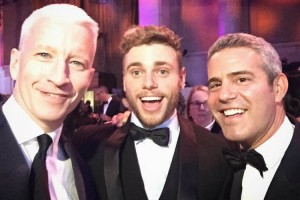 Kenworthy and Krieger then play a game of word association that makes Kenworthy blush when the word “sex” is tossed out. “Oh my god I can’t do this,” Kenworthy says before revealing that the word that comes to mind is “lube.” And while you might guess that the word “silver” would make Kenworthy think “medal” (he won the silver medal at Sochi), Gus says, “fox” as in “Silver fox. Like Anderson Cooper. We’re friends now, by the way.”

Then, because this is a video with Gus Kenworthy and Kyle Krieger, they both get shirtless for your viewing enjoyment. And Gus even blows you a kiss. 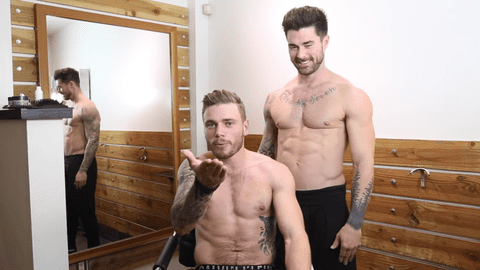 RELATED: Enjoy This Hot Workout Video from Two of Instagram’s Most Muscular Stars