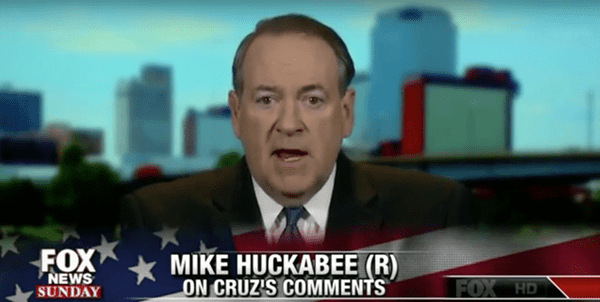 Mike Huckabee is standing by his criticism of Ted Cruz that the Senator from Texas talks out of both sides of his mouth on gay marriage.

While Cruz is on record as being virulently opposed to gay marriage, his remarks this past summer at a private closed-door fundraiser in New York raised the former Arkansas governor’s hackles. When questioned by a Republican donor who supports gay rights, Cruz would not say that fighting gay marriage would be one of his top three priorities as president. He instead equivocated, saying that “defending the constitution” is one of his top priorities. It’s good to note here that Cruz’s interpretation of the constitution precludes “5 unelected judges” from protecting the rights of a minority group.

Huckabee first went after Cruz on Twitter for his comments, which were recorded without Cruz’s knowledge and leaked. Huckabee tweeted, “If marriage & sanctity of life are truly issues of principle-not politics-there shouldn’t be geographical boundaries to what’s right & wrong.” Shortly thereafter, a Huckabee Super PAC aired an ad in Iowa denouncing Cruz for changing his tune on gay marriage when speaking to wealthy Manhattan Republican donors it labels as “liberals who don’t share our conservative Iowa values.”

On Fox News this Sunday, Huckabee was asked whether that ad was “selectively and deceptively editing” what Cruz said since it didn’t included his lengthy comments in which he reiterated his opposition to the Supreme Court’s ruling on gay marriage (even if in roundabout fashion). Huckabee’s response? Nope.

“There was nothing selective, there was nothing deceptive. The point is that in Iowa he’s made a major point and he’s pitched to evangelicals as a person who is utterly authentic, he’s going to fight for religious liberty, he’s going to protect the right of people to disagree with decisions on same-sex marriage, but that’s not what you heard in that Manhattan fundraiser. And that’s the only thing I’ve pointed out. It’s just a matter of listening to the transcript and recognizing it’s not a big issue when he’s in Manhattan, but it is a big issue when he’s in Iowa.”

Huckabee also called the donors Cruz was courting the “Washington to Wall Street axis of power.” A Republican term if ever there was one.