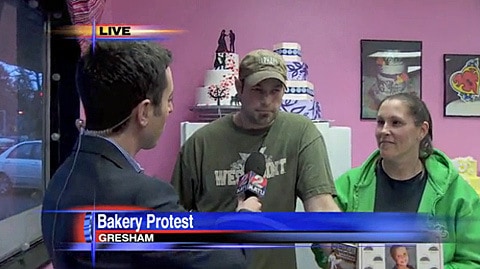 Aaron and Melissa Klein, the owners of Sweet Cakes by Melissa, who were fined $135,000 by the Oregon Bureau of Labor and Industries (BOLI) after a lesbian couple pursued and won a discrimination case against the bakery for denying them services, have finally paid their fine. The Kleins made national news after the couple denied lesbian couple Rachel and Laurel Bowman-Cryer a wedding cake over religious beliefs.

The Bureau of Labor and Industries says Aaron Klein, co-owner of the Portland-area bakery, dropped off a check Monday for $136,927.07. That includes accrued interest. Klein also paid $7,000 earlier this month.

The Kleins had been refusing to pay the damages for nearly six months and the Klein’s attorney had requested a stay with the Oregon Court of Appeals, arguing the fine would ruin the couple’s business, despite the fact that supporters of the bakery have donated nearly $500,000 to the couple.