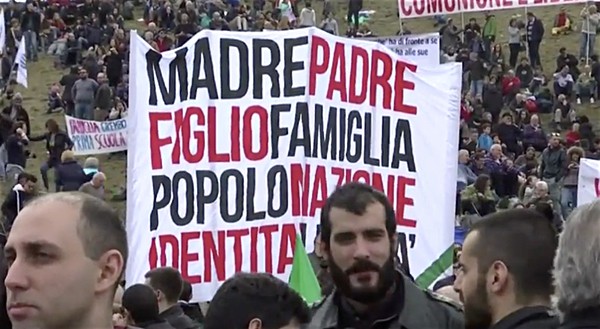 A massive protest was held in Italy by “pro-family” groups opposed to the legalization of gay civil unions which are under consideration in Italian parliament.

Reports on the numbers at the protests vary. Reuters reports:

Hundreds of thousands of Italians staged a mass rally in Rome’s Circus Maximus on Saturday to urge the government to drop legislation that offers homosexual couples legal recognition and limited adoption rights….Trains and buses ferried in protesters from around Italy to take part in the event, staged in Ancient Rome’s famed chariot racing stadium. A group of black-clad Roman Catholic priests danced the conga, while children rushed around the grassy arena.

Local LGBT advocacy groups called the protest a “flop” and said there were nowhere near 300,000 there.

Upwards of an estimated half-million people filled Rome’s Circus Maximus venue, although organizers said as many as 2 million supporters attended the rally. That number could not immediately be verified by NBC News.

The Italian Church has so far stayed out of the debate although Cardinal Bagnasco has said the family day is “absolutely necessary” and that the civil union bill is a “great distraction” from the political task of creating jobs and providing social security.

Traditionally the Church in Italy, with the help of the Vatican, has opposed attempts to bring in legislation recognising gay couples such as in 2007 when Roman Prodi tried to pass such a bill.

Under Pope Francis, however, the Italian bishops have taken a less combative approach: during a landmark speech to the hierarchy last November Francis called on them to embrace dialogue and ensure “theology never becomes ideology.” And another “Family Day” event last June received only tacit support from the Italian bishops.

Watch raw footage from the protest:

Previous Post: « Here’s Something New, Wonderful, and Historic at the X Games: ‘Gus Kenworthy’s Boyfriend’ on ESPN – WATCH
Next Post: Why Did Bill Maher Give a Major Platform to Dangerous AIDS Quack Samir Chachoua? »