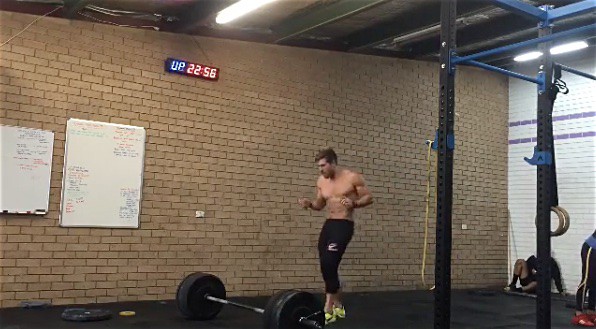 Because if there’s anything that will get you prepped to put 264 lbs over your head, it’s Beyoncé.

Australian Crossfit athlete Khan Porter followed up the video, which has racked up hundreds of thousands of views, with a message about masculinity:

If you guys watched my Beyoncé video yesterday, I would love you to take a moment out of your day and read the following.

Yesterday I reposted a video of myself dancing to Beyoncé and at the time of writing it, it’s been watched over 1.5 million times.

It’s also been Shared a bunch and even made its way on to TV haha.

I reposted my video after seeing Channing Tatum’s lip sync battle with his wife in which he dressed in drag and danced to a Beyoncé song and the interwebs went wild.

I posted my video for fun obviously, but also because l think the way the public reacted reflects a pretty cool shift in preconceived notions of masculinity and think that’s grounds for starting some more positive conversations about what it means to be “a man”.

A well known male celebrity goes on national television, dresses in drag and dances to a girls song and the world embraces it with open arms.

I post a video dancing and it too gets plenty of positive attention, showing a shift in the way society views masculinity or what is acceptable for a man to do or say.

But how far does that acceptance go?

If myself or Channing Tatum were openly gay and did the same thing would people still applaud it?

There’s still so many stigmatic ideas around masculinity and blokes face very real issues in terms of dealing with what society has deemed as appropriate behaviour for their sex.

Did you know that suicide is the leading cause of death for males aged between 15-44?

How about that the rate of suicide in men is almost triple women?

As someone who has personal experience with mental health issues, I know how difficult it can be for a man to seek help for something that is often brushed off as “just being a pussy” or a “soft cock”.
If society can have a good laugh and accept a man dressing up and / or dancing like a woman these days, how hard is it to have a chat to your mates about something like mental illness.

Just as its ok for blokes to dance, it’s ok for them to battle mentally and emotionally sometimes too.
If a bunch of people can watch a 25 second video, surely they can also spare the time to ask one of their mates if everything is ok 🙂