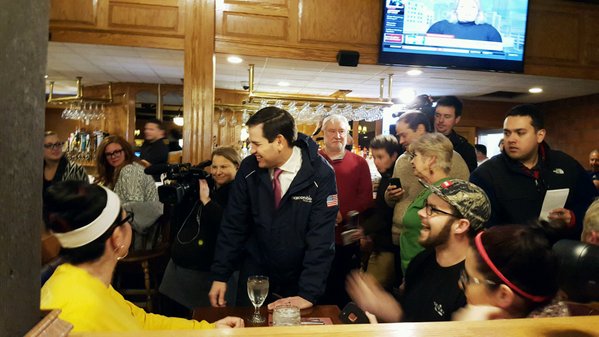 A gay diner owner in New Hampshire challenged Marco Rubio on Monday over his opposition to same-sex marriage.

The man, 50-yeard-old Timothy Kierstead, took Rubio to task, asking him, “Why do you want to put me back in the closet?” Rubio tried to pacify Kierstead, saying, “I don’t. You can live any way you want.”

But Kierstead wouldn’t let up on Rubio, saying that he has been married to a man for a long time and that Rubio wants to say “we don’t matter.”

The New York Times reports on the rest of their exchange:

Mr. Rubio, who was standing with his youngest son, Dominick, 8, by his side, gently disagreed. “No, I just believe marriage is between one man and one woman.”

Mr. Rubio continued: “I think that’s what the law should be. And if you don’t agree you should have the law changed by a legislature.”

Mr. Kierstead said the law had already been changed, referring either to a Supreme Court ruling that has legalized same-sex marriage across the country or to state legislation in New Hampshire that did the same.

Mr. Rubio decided to conclude their conversation. “I respect your view,” he said, patting Mr. Kierstead on the shoulder and starting to walk away.

Gay voter to Marco Rubio: "Why do you want to put me back in the closet?’ https://t.co/CpLAz4bOzu pic.twitter.com/wAzVXJAcra

Kierstead went on to tell the NYT that he has three children and is a registered independent planning to vote in Tuesday’s Democratic primary because of the party’s support for marriage equality.

Of Republicans, Kierstead said, “They want to take my rights away as a citizen of the United States. Love is love. People don’t choose who they are going to love.”

Another person at Kierstead’s diner asked whether former presidential contender Lindsey Graham is gay. Via The Washington Post:

A few minutes later, a 92-year-old woman named Marge Bienvenue talked to Rubio about Sen. Lindsey O. Graham (R-S.C.), whose name she could not recall at first.

“He’s a bachelor right?” she asked.

“No,” he replied with a chuckle.

Watch a video of Rubio stopping by Kierstead’s Puritan Backroom diner, below.