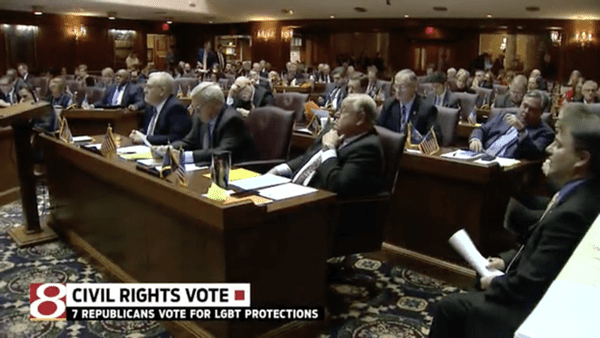 Indiana lawmakers on Thursday failed to pass even the most basic of LGBT civil rights bill that would have protected Hoosiers from work-place discrimination based on their sexual orientation or gender identity. 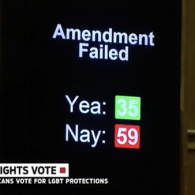 The bill voted down on Thursday also took a narrow approach, focusing only on employment discrimination in hopes of getting something done on the matter. But lawmakers could not even agree that LGBT people have the right to not be discriminated against at work.

It was an effort to find Republican support for a measure that avoided the controversy caused by earlier proposals. Seven Republicans voted for it yet the House voted to defeat it on a vote of 35 to 59. 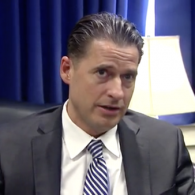 “We know where people as of today stand on the civil rights issue,” said [House Minority Leader Scott] Plath [right], “and that’s important for economic development. We should keep working on it.”

House Speaker Brian Bosma says more Republicans would have voted for the amendment if it had been the subject of a public hearing.

Indiana Competes, a coalition of business leaders, issued a statement calling the vote a declaration that Indiana will continue to tolerate discrimination against the LGBT community.

Let that sink in for a moment. Employment. The ability to work hard, earn a living and put food on the table for your family? Some Indiana lawmakers don’t even think LGBT people should be afforded that most basic, fundamental freedom.

The group also took to Twitter to condemn the vote as an “outrage.”

Watch a news report from WISHTV, below.