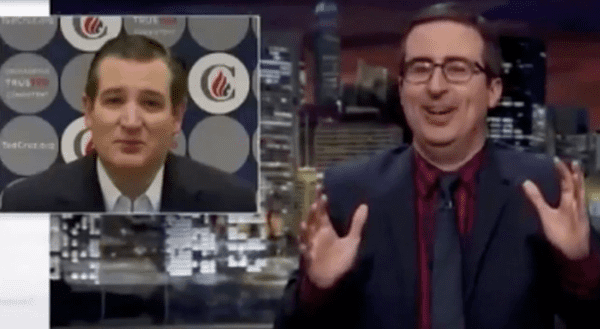 John Oliver on Sunday eviscerated Republicans in the Senate who have vowed to block any nominee President Obama puts up to replace Antonin Scalia on the Supreme Court.

Oliver began by parsing out the various arguments put forth by Ted Cruz and other GOP senators who are attempting to justify their obstructionism. As you might expect, their arguments don’t hold water.

Taking apart Cruz’s claim that, “For the last 80 years the Senate has not confirmed any nominee nominated in an election year”, Oliver says,

“…that is so close to being true. Unfortunately, it ignores Justice Brennan nominated in 1956 and Justice Murphy nominated and confirmed in 1940 so even by your own arbitrary 80 year time frame there are between 1 and 5 exceptions to your own precedent. You’re basically a baker going, “Oh, don’t worry. There are no nuts in that. Except for walnuts, cashews, almonds, peanuts and the stray pistachio. Sh[*]t. I’ll get my EpiPen.”

Oliver also blasted a group called the Judicial Crisis Network which used stock footage to compile a bogus ad claiming that the way American democracy works is that the next president gets to fill the current vacancy on the Supreme Court. Oliver quickly corrected them: “I hate to sound like your dad here. You can’t open a new president when you’ve got a perfectly good president already open. Finish the old president first.”

Watch Oliver tell Senate Republicans to do their f*cking job, below: