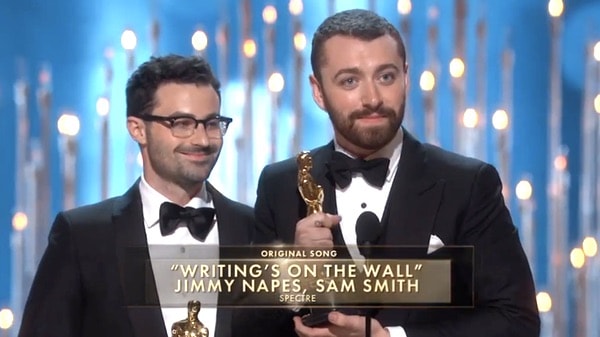 Last night at the Oscars, after winning the statue with Jimmy Napes for his James Bond theme “Writing’s on the Wall”, Sam Smith gave this speech:

“She can’t breathe right now…I read an article a few months ago by Sir Ian McKellen and he said no openly gay man had ever won an Oscar. And if this is the case, even if it isn’t the case, I want to dedicate this to the LGBT community all around the world. I stand here tonight as a proud gay man and I hope we can all stand together as equals one day.”

.@SamSmithWorld: "I hope we can all stand together as equals one day." https://t.co/vG5LjQdCo9 #Oscars https://t.co/bACtLSviUU

After Smith’s speech, social media erupted to correct him.

Among the openly gay men who have won it are screenwriters Bill Condon (for Gods & Monsters), Alan Ball (for American Beauty), Bruce Cohen and Dan Jinks (who publicly thanked his boyfriend) for American Beauty, George Cukor (director for My Fair Lady), Howard Ashman (the Disney lyricist), Sir Elton John, Stephen Sondheim, Melissa Etheridge, and of course, Dustin Lance Black, who most recently won it for Milk in 2009.

Black wasn’t having Smith’s speech last night, because there seemed to be another complaint on the table as well that was brought out to air.

Hey @SamSmithWorld, if you have no idea who I am, it may be time to stop texting my fiancé. Here's a start: https://t.co/8hGTRtIaMK

Black tweeted to Smith, with a video of his Oscar speech: “Hey @SamSmithWorld, if you have no idea who I am, it may be time to stop texting my fiancé.”

Smith, acknowledged he made an error about his claim in a post-Oscar interview, but he still wasn’t right.

“I think I’m the second openly gay person to win it.”