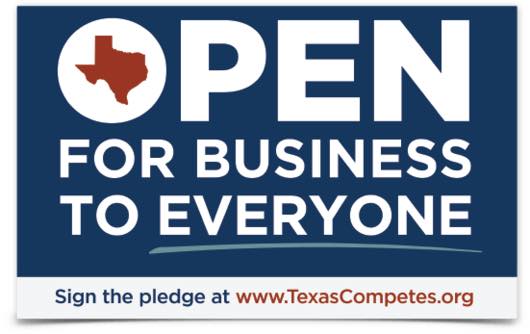 Everything’s bigger in Texas — including business support for gay rights.

More than 500 businesses and pro-business groups — including dozens from the Fortune 500 — have now joined Texas Competes, a coalition whose mission is to make the economic case for fair treatment of LGBT people. The only requirement for membership in Texas Competes is signing a pledge in support of an LGBT-welcoming environment in the Lone Star State.

“Texas Competes launched in April 2015 with a very simple economic message: as a state, we must be welcoming to the LGBT community, or face serious economic consequences,” the group wrote on Facebook this week. “Less than a year later, we have passed an enormous milestone: more than 500 Texas employers have signed our free pledge. If your business has signed, THANK YOU!”

Beginning with the controversy over a 2014 “religious freedom” bill in Arizona, which was ultimately vetoed by GOP Gov. Jan Brewer, the corporate sector has emerged as the LGBT community’s most important ally in fighting discriminatory legislation. In 2015, intense business backlash forced the Indiana Legislature to amend a religious freedom law to clarify that it doesn’t sanction anti-LGBT discrimination.

Although Texas Competes doesn’t take positions on specific legislation, its members were active last year in opposing anti-LGBT bills, including GOP state Rep. Cecil Bell Jr.’s unsuccessful measure aimed at undermining the U.S. Supreme Court’s ruling in Obergefell v. Hodges. At the same time, Texas Competes members arguably could have been more outspoken in support of Houston’s Equal Rights Ordinance, which voters overwhelmingly repealed in November. And although the Texas Legislature doesn’t meet this year, the coalition’s influence will undoubtedly be tested in the 2017 session.

As signers of the Texas Competes pledge, we are committed to promoting a competitive, economically vibrant Texas.

We believe that in order for Texas businesses to compete for top talent, we must have workplaces and communities that are diverse and welcoming for lesbian, gay, bisexual, and transgender people.

We believe that treating all Texans and visitors fairly is essential to maintaining Texas’ strong brand as the premier home for talented workers, growing businesses, entrepreneurial innovation, and a thriving travel and tourism industry.

It’s time to ensure fairness for all Texas employees, residents, and consumers. A united Texas is a competitive Texas. And when Texas competes, Texas wins.

View the full list employers that have signed the Texas Competes pledge here.

Disclosure: My business, Lone Star Q, is a member of Texas Competes.