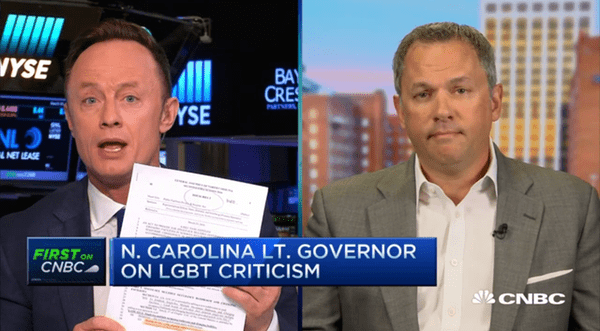 As we’ve been reporting, HB 2 bans all local civil rights ordinances in North Carolina. Forest appeared on CNBC’s Squawk Box to try and defend the bill.

Forest opened by contending with the “anti-LGBT” moniker given to the bill, saying that the bill is not “anti-LBGT.” Apart from that gaffe, Forest re-aired the offensive trans bathroom myth. Of Charlotte’s NDO, Forest said the city created “a loophole that allowed men, sexual predators, people that perhaps are pedophiles, to go into a women’s bathroom, to go into a women’s shower facility and to make that legal to do that.”

Forest also complained that most people haven’t even read the bill, so how can they know its anti-LBGT?

Host Hobbs was having none of that. Said Hobbs, “Mr. Forest, I have read the bill—house bill 2—I’ve got it here in front of me and on the one hand it does explicitly—explicitly—discriminate against transgender people.”

Hobbs summed up how HB 2 goes out of its way to make sure that only the classes of people mentioned in it are protected against discrimination:

“By excluding [protections based] on sexual orientation, [LGBT people] can’t sue in the state, so it is actually deferential treatment to the LGBT community in addition to what it’s doing to transgender people.”

Hobbs then went on to throw some shade at Forest in the form of a question.

“Let me ask you sir, where are you getting your legal advice from now? Because your Attorney General said last night that he’s not prepared to prosecute cases, saying it was a national disgrace.”

Of Attorney General Roy Cooper, who has said he will not defend HB 2, Forest said, “He hasn’t done anything to protect the state of North Carolina.” Forest added that Cooper needs to “step up and do his job and defend women and children from predators in bathrooms.”

As for the potential cost of big business pulling out of North Carolina, Forest says he isn’t worried:

“There is no cost here. Listen this is a big fantasy. You know it happened in Houston, when Houston had the same ordinance. All these same cast of characters were coming out, saying they were going to pull out of Houston, they weren’t going to do business. Look, Houston is still in business. They’re doing fine down there.”

Watch the interview, below.