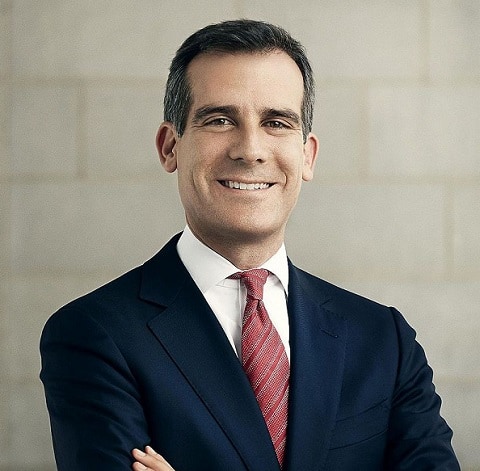 Los Angeles Mayor Eric Garcetti has written to President Obama asking him to designate the Stonewall Inn as a National Monument.

The letter also calls for making the adjacent Christopher Park a National Monument under the Antiquities Act.

“Two and a half years before the Stonewall Riots in New York City, the first documented demonstration for Lesbian, Gay, Bisexual and Transgender (LGBT) rights in the nation occurred outside the Black Cat Bar in Silver Lake on Sunset Boulevard. The demonstrations happened after undercover LAPD officers arrested and assaulted bar patrons for kissing during a New Year’s Eve celebration in 1967. Displaying great courage and bravery, 200-300 Angelenos protested these police actions against the LGBT community. In 2008, as then City Council President of Los Angeles, I worked to successfully designate the Black Cat Bar as registered landmark in the City of Los Angeles.

“Los Angeles has played an influential role in the nation’s LGBT history that includes the formation of first American gay rights group, the Mattachine Society; the first gay publication, One Magazine; the first gay pride parade on the one year anniversary of the Stonewall Riots; and the first parade protesting the military’s LGBT ban. It is with this history in mind that I write in support of designating the Stonewall Inn in New York City as a National Monument through the Antiquities Act.

“Although the struggle for equal rights extends from coast to coast, the Stonewall Riots in 1969 served as an historic turning point in LGBT history. Recognizing the Stonewall Inn and Christopher Park in New York City’s West Village would honor the American LGBT experience in every city and help to teach people of an important historical event that has helped to shape our nation.

“The struggle for equality touches us all and our National Monuments are an excellent apparatus for telling America’s history. I hope that by designating Stonewall as a National Monument we preserve a part of history that has long lived in the shadows.”

According to The Advocate, as president of the LA City Council in 2008 Garcetti successfully lobbied for the Black Cat bar in the city’s Silver Lake neighborhood to be designated a city landmark.

"The Stonewall Riots in 1969 were a key turning point in #LGBT history." – Mayor Garcetti – https://t.co/eX315FFeKV pic.twitter.com/qDGkuHKYIY

The Stonewall Inn is listed on the National Register of Historic Places and was last year designated a landmark by the New York City Landmarks Preservation Commission. National Monument status would provide further protection for the site and could lead to more memorials being developed there.

Previous Post: « Steve Grand: ‘I’m Such an Easy Person to Target’ as a Young, Good-Looking, White Gay Man
Next Post: Jake Gyllenhaal and Jimmy Fallon Spit Food All Over Each Other: WATCH »