You are here: Home / Pat Robertson Praises Man Who Escaped Homosexuality and Married a Woman – WATCH 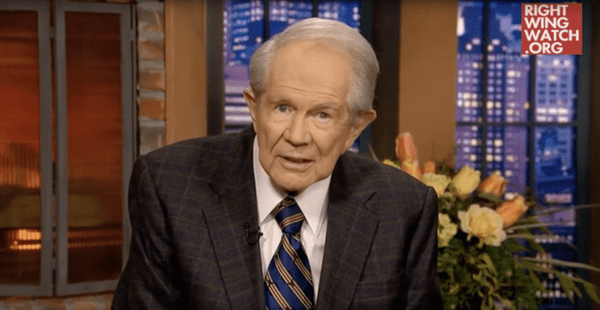 Hoary old increasingly irrelevant bigot pastor Pat Robertson has taken to airwaves to praise an unidentified man who married a woman in order to escape evil gays trying to recruit him.

The card-carrying Gay Agenda members, explained Pat, “just wanted to take advantage” of the poor man “and he didn’t know any better.” He goes on:

“Robert chose the homosexual lifestyle because he craved attention from men. We have all these myths about homosexuality and he was just being used by people, they just wanted to take advantage and he didn’t know any better. He thought that what they were showing him was love when actually it was one form of lust. When he came free, he wasn’t ‘homosexual,’ he was a person looking for love, he wanted the real thing and he got it, God gave him real love.”

Praise be the Lord.

Listen to Pat’s obsessive bullsh*t below via Right Wing Watch.

Previous Post: « Here’s What Steve Grand Does at the Gym – WATCH
Next Post: How ‘Mad Max: Fury Road’ Caused Actual Fury in the World’s Oldest Desert »