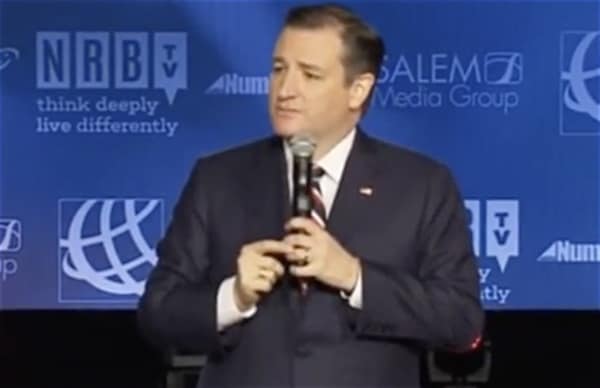 Ted Cruz gave a speech last week to the National Christian Broadcasters Convention and trotted out a new twist on the right-wing lie about gay marriage and religious freedom.

Cruz completely twisted remarks made during Obergefell’s arguments by Solicitor General Donald B. Verrilli. While Verrilli said that he couldn’t answer the question about tax exemptions, Cruz alleged that “the answer from the Obama Justice Department in the open court of the Supreme Court of the United States was yes, that is a very real possibility that the IRS will come after you, that if your hosts go on air and say, ‘the Bible teaches that marriage is not defined by man, it is defined by God as the union of one man and one woman to mirror the relationship of Jesus Christ and the church,’ that you risk the federal government yanking your FCC license. That’s the threat we’re facing. They’re not hiding from this threat. They’re saying in open court, ‘We will use the power of government to go after and target those who speak against us.’”

Despite Cruz’s claim, legal analysts and religious groups have said it would be highly unlikely that marriage equality will bring about the end of tax exemptions for religious institutions that oppose same-sex marriage.

Secondly, the FCC issue never came up in court, and Verrilli never came close to claiming that the government will go after religious broadcasters or people who speak out against same-sex marriage.