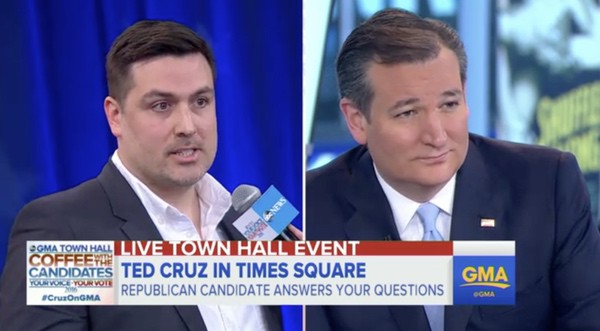 This morning Good Morning America held a Town Hall with Ted Cruz and Cruz again proved his ability to dodge questions and turn queries about LGBT discrimination into diatribes about Christian victimization.

Todd Calogne, a married gay man who is a Republican and pizza parlor owner in New York City, stood up and said he’s noticed all of the “religious freedom laws and somewhat institutionalized discrimination” laws popping up around the nation, and asked Cruz what he’ll do to protect him and his husband.

Robin Roberts noticed, like everyone else, that Cruz didn’t answer the damn question, he just argued that Christians should be protected, not gays.

Cruz dodged the question once again.

George Stephanopoulos then questioned Cruz’s support for a federal marriage amendment: “What would that mean for couples like Todd and his husband who already are married?”

“I am a constitutionalist. And under the constitution, marriage is a question for the states. That has been the case since the very beginning of this country – that it’s been up to the states. And so if someone wants to change the marriage laws I don’t think it should be five unelected lawyers down in Washington. Dictating that. And even if you happen to agree with that particular decision, why would you want to hand over every important public policy issue to five unelected lawyers who aren’t accountable to you, who don’t work for you. Instead, convince your fellow citizens to change the laws.”

So pizza show owner Calogne was left hanging – his question wasn’t answered, because there is NOTHING Cruz will do to protect him and his husband. Nothing.

And that, of course, leaves everyone with another question: Todd, why the hell are you voting Republican?

Previous Post: « Watch the Gay Kiss That Just Broke a Spell on ABC’s Fairytale Series ‘Once Upon a Time’ – SPOILERS
Next Post: Chris Hemsworth Gave an Amazing Answer When His Daughter Asked Him For a Penis – WATCH »