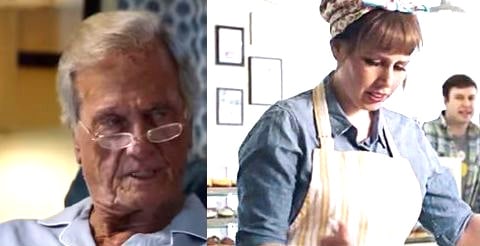 Meat-loving entertainer Pat Boone is not best pleased with Saturday Night Live’s skit God is a Boob Man, which parodies his latest movie God’s Not Dead 2.

In God’s Not Dead 2, a public school teacher played by Melissa Joan Hart has to fight for her job after she mentions scripture in a class discussion of the nonviolence of Gandhi and Dr Martin Luther King. Boone plays her god-fearing father. According to the Guardian:

“Ray Wise practically has a serpent’s tongue as the sleazy American Civil Liberties Union lawyer who wants to destroy this nice, blonde, cardigan-wearing teacher who lives with her ill father (Pat Boone!) and just wants to serve God.”

The SNL skit, “a story of liberal elites run wild,” took on anti-gay bakers, religious freedom, and Christian victimization. When a gay couple comes into her bakery and asks for a cake, a Christian baker’s faith is tested. “They wanted her to spit in the face of God.” The gay couple threatens to sue her and demands she say three simple words: God is Gay. So she sets out to prove to the world that God is straight.

“God has a sense of humor. Why else would he invent the porcupine and the giraffe? Something can be devilishly funny, but this skit is diabolical. God has only one real enemy – Satan. Satan ridicules faith, and they’re taking Satan’s side. They’re also ridiculing me and the film, telling impressionable young people not to see it because it’s ridiculous. Then they throw in that the lawyer is Jewish to make the Christian look even worse, but it’s just anti-Semitic.

“This skit was outright sacrilege. They know if they did this to Muslims they’d have to be put into the witness protection program. There’s nothing sacred at SNL – except maybe the words ‘Mohammad’ or ‘Allah.’ They’d never take those names in vain, but when they called God a ‘boob man,’ they took his name in vain.”

No longer a fan of the “filthy” show, Boone said SNL “went over the line, and believers in God deserve an apology.”

Acknowledging that an apology is unlikely, Boone doesn’t really care because “they answer to the one they defame, and there are consequences.”

Watch a trailer for God’s Not Dead 2 and the SNL skit below.

Previous Post: « Man Who Beat Transwoman Islan Nettles to Death in 2013 Gets 12 Years in Prison
Next Post: Under Scrutiny from ESPN, Curt Schilling Says He Was ‘Blindsided’ by Outrage Over His Transphobic Facebook Post »