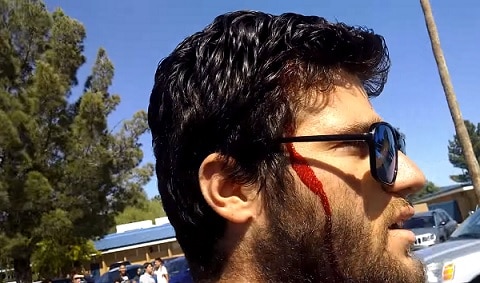 An anti-gay Arizona street preacher required hospital treatment after he was hit over the head with a baseball bat by an offended student.

In a video recorded by Saxton, he is approached by students and staff regarding his comments. Saxton accuses one teacher of trying to influence students to which she replies:

“I’m trying to influence the fact that you need to be gone. I think you’re a disgrace to Christianity. Why don’t you go and preach it to somebody who really wants to hear your message, like Westboro Baptist Church?”

As another adult approaches Saxton asking him to leave, the preacher is hit over the head.

Brubaker was charged with felony assault and possession of marijuana.

Watch Saxton’s video below. The assault takes place around the 17-minute mark.

Previous Post: « What To Watch On TV This Week: ‘So You Think You Can Dance,’ ‘Kingdom’ Return
Next Post: Nike To Issue (Subtle) LGBT Pride ‘Be True’ Air Max Zero Sneaker »