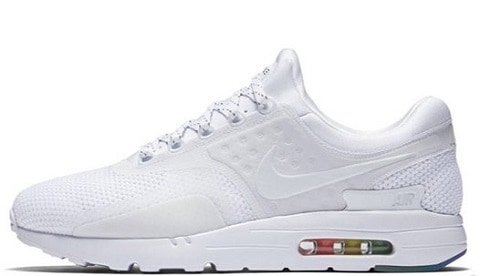 Nike has announced plans to celebrate Pride month with the release of a rainbow-studded Air Max Zero, part of the company’s “Be True” collection.

The all-white sneaker features a rainbow pattern on the Air unit insole with what HighSnobiety calls “a blink-and-you’ll-miss-it touch on the heel of the outsole” and “a touch of sparkle with minor reflective details laden throughout.”

Nike has not yet revealed a release date but expect to see the Pride Air Max Zero next month.

In March, Nike produced a pair of custom-made ski goggles for out gay Olympic freeskier Gus Kenworthy. The company has also parted ways with homophobic boxer Manny Pacquiao after he said gay people are “worse than animals.”

Previous Post: « Anti-Gay Preacher Assaulted With Baseball Bat Outside Arizona High School: VIDEO
Next Post: Nick Jonas: ‘I’d Be Lying’ if I Said I Haven’t Had Sex with a Man »