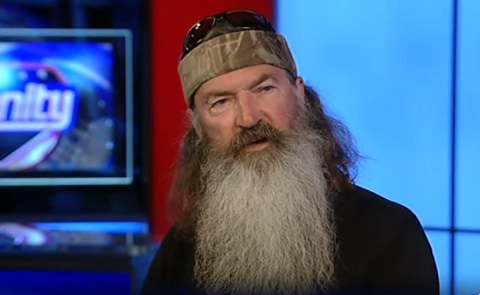 Duck Dynasty head honcho Phil Robertson has teamed up with Citizens United to attack – and make money from – anti-trans “bathroom laws” in North Carolina and other states.

Citizens United is best known for its part in a Supreme Court ruling which held that the government could not restrict political expenditures by nonprofit corporations.

In an email sent to supporters last weekend, Robertson wrote that “the Judeo-Christian values that led America to greatness are under full assault by the mob mentality of political correctness, and we’re slowly losing our soul.”

RELATED: Phil Robertson Advocates Marrying Girls When They Are 15 Or 16: VIDEO

“Men,” Robertson continued, “should use the men’s bathroom and women should use the women’s bathroom. Just because a man may ‘feel’ like a woman doesn’t mean he should be able to share a bathroom with my daughter, or yours. That used to be called common sense. Now it’s called bigoted.”

According to the Hollywood Reporter, the email includes a link to StandTallWithPhil.org, which asks for donations to Citizen United’s Speak Freely effort in conjunction with Robertson.

Watch Robertson at the Cruz rally below.