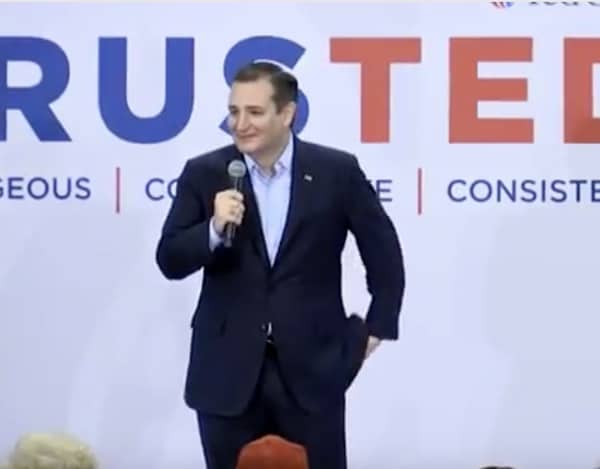 Duck Dynasty’s ‘Duck Commander’ Phil Robertson has been stumping for Ted Cruz in South Carolina, and in return Cruz is floating the idea of Robertson as ambassador to the United Nations.

Said Cruz in Myrtle Beach (below):

“Imagine…Phil Robertson…ambassador to the United Nations. “How much would you pay to see the Russian ambassador’s face when Phil says ‘what is wrong with you people? ‘”

He gave a similar plug in West Columbia:

“Imagine Phil Robertson as the ambassador to the United Nations,” Cruz told a raucous crowd of several hundred backers at an airplane hangar in West Columbia, “How much would you pay to see that? Can you just imagine sitting in the UN general assembly, the Russian ambassador says something, he leans over and says `Well that doesn’t make any sense at all!’ ”

…“And how about Phil Robertson? I love that man. Talk about a man who loves Jesus and isn’t afraid to admit to anyone and everyone, to proclaim his name with no apology and with nothing but joy,” Cruz said.

Robertson, as you may recall, introduced Cruz at an event in Iowa City, last month in which he also bashing gay marriage as ‘evil, wicked, and sinful’.

“Don’t you understand that when a fellow like me looks at the landscape and sees the depravity, the perversion — redefining marriage and telling us that marriage is not between a man and a woman? Come on Iowa! It’s nonsense. It is evil. It’s wicked. It’s sinful. They want us to swallow it, you say. We have to run this bunch out of Washington, D.C. We have to rid the earth of them. Get them out of there. Ted Cruz loves God.”